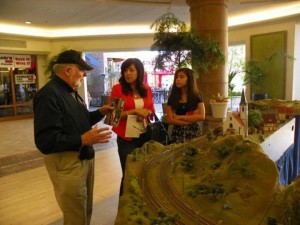 Don and I received an email from Ian Lorentzen from the San Francisco
Chapter who closed with a short note about Don Fridlund’s death.  Ian
thought we knew, so he didn’t include any details.  Don and I are going to
try to find out more so we can send some flowers.

Don was an ETE SoCal member for years, a retired engineer from Disney and
proud of being a “cast member” for many years.  He was very detail oriented
as is obvious in the job he did as he built the vineyard.  The finest vines
were his own invention and very difficult to construct as I discovered.  He
and his wife, Janet, were both retired and as Janet’s cancer worsened, they
decided they needed to sell their long-time house in Fullerton to move up to
Livermore to be closer to both of their adult children and grandchildren.
Mere months after their move, Janet passed away, but it did not drag Don
down.  He joined the San Francisco Chapter of ETE and was very active, even
helping with Blackhawk, their multi-week show.

We in SoCal have missed him since his move about 5 years ago- his
willingness to do what was needed and his being at all the meetings. Even
Janet came to several.  They really supported ETE.  We will truly miss him.
I’m sure those of you who knew him would have wanted to know which is why I
sent this email.  Those who didn’t, check out the vineyard next time it’s
out and look at the workmanship.  It’s a little bruised from rides in the
trailer, but that doesn’t change the fine work.

I’ll miss the work day because of grandsons this Saturday, but will be
thinking about you.  Have fun and think of Don Fridlund.  He would have been
there if they hadn’t moved!